I Have tried this a few times; it works very well to protect and strengthen the energy field as I sleep. I wake up feeling totally zingy. Here Is the technique … I bought a bag of rough quartz crystals from Amazon.com … mine were $20 for a pound, which is plenty for 2 people …

The above is a beautiful example of a quartz crystal; mine were rough-cut quartz crystals, but nevertheless worked wonderfully well …

I made a plan to sleep on my back last night. Then I put the crystals on me on the places corresponding to the colored circles in the drawing below. These circles represent the chakras, the energy centers of the human body. 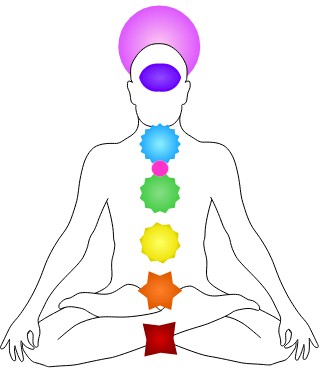 Image: Adapted by Alice B. Clagett from “A Map of Chakras in Human Body,” mpan, based on File:Czakry.png … 17 June 2016, public domain

Image: Adapted by Alice B. Clagett from “A Map of Chakras in Human Body,” mpan, based on File:Czakry.png … 17 June 2016, public domain

This worked just great for me last night. This morning I woke up and the bedroom was flooded with white crystal Light. It was bedazzling!

Of course, you do not have to use as many crystals as I did. Sometimes I use just one resting on my pillow at the top of my head. Or one on my heart chakra … You will for sure know just what to do and when to do it.

Put the crystals outside as soon as you are finished using them. (In addition to protecting you, they may have absorbed some interfering energies.) Then during the daylight hours, replenish their zing by bathing them in sunshine all day.

Hope you like this technique, and can maybe make use of it with as much fun as I have.